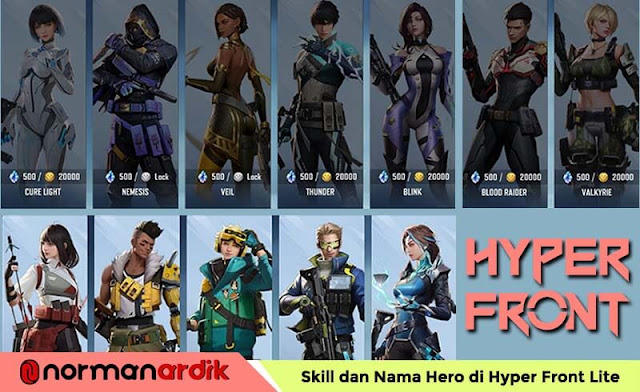 Hyper Front Lite was released recently, but this 5v5 FPS game has captured the hearts of gamers because of its Valorant-like gameplay and graphics. Moreover, its size is quite light and does not burden the memory too much.

Well, for those of you who are new to playing but confused about choosing a character, the following admin gives a list of the names of the heroes in Hyper Front Lite that are the most GG complete with their skills or abilities. Listen to the end, OK!

For now, there are 12 heroes in Hyper Front Lite, but only a few are free. While some, for example Nemesis and Valkyrie, you can claim using StarCoins or Star Quatz currency.

But don’t worry, free heroes have abilities that are no less good. If you practice often and understand the character, you will eventually become good at it.

Here’s a collection of hero names in Hyper Front Lite:

Blast is a basic hero that all players must have. This hero is very suitable to be in the forefront because of the attacking type. Moreover, Blast is very easy to use with high Damage and Mobility.

As for the Blast skill, all of them produce damage, except for the Jetpack which can be used to monitor the opponent from a height.

Pix which has the Sentinel title is also a basic hero. All players must get this hero at the beginning of logging in. His appearance is quite cool and impressed Hypebeast. Pix is ​​more suitable for use in the middle or back row.

Because of his Drone/Homing style, Pix Sentinel’s skills are very useful for knowing the opponent’s position. Moreover, there is a Stun Grenade skill that will make the enemy freeze for a few seconds.

As the name implies, Sumine is a hero in Hyper Front Lite who has archery skills with Area Scan and Pashing styles. This hero can also be obtained for free, but you must complete the mission first.

All characters in Hyper Front Lite have 3 different skills, some of which produce damage and some to stun or spy on enemy positions.

Next there is Viento who is a hero with the Tactician class. Storm or Viento are experts in the field of technology because he is so eager to prove that humans are better than robots or Artificial Intelligence.

Viento’s trademark is that he uses glasses to open the map and launch skills that can determine enemy locations or deal damage.

MIA is a hero in Hyper Front Lite with a half human and robot appearance. With the title Cure Light, this hero is a Supporter type and has the ability to restore a friend’s HP after being hit by enemy fire.

Because of the Supporter type, MIA Cure Light is more suitable in the back row and becomes a “doctor” when a friend is dying. If the intensity of the game is high, you can pick MIA during matchmaking.

Coldcast or Ice Snow is a female hero in Hyper Front Lite who is a Guardian type. With the Trap/CC style, you can rely on this hero to create traps and control the path of attack.

Because the type is Guardian or Guard, Frost is very suitable to be chosen if you use a defensive strategy. Moreover, his ability is dominated by stun and inhibit the opponent’s movement.

You could say Nemesis is the best hero in Hyper Front Lite. Besides being only available with Star Quartz top up, this hero has cloning and illusion skills. Very suitable for provoking enemy movement.

With a mysterious and scary appearance, Nemesis is the mainstay of almost all players. The following skills are owned by Necrys Nemesis.

The next hero name in Hyper Front Lite is Akila. Veil is the title of this Tactician-type hero. The hallmark of Akila is being able to issue gold-colored sand to attack or defend.

Entering the Brawler class, Ray can be a mainstay if you need an attacking type hero. Especially with the title Thunder, Ray is equipped with lightning strike skills to produce high damage to nearby enemies.

The skills of Thunder all have lightning elements, some are for defense and attack.

Lightning Dash – Runs as fast as lightning in the intended direction, can be to chase or avoid the enemy

Claretta is the name of the hero in Hyper Front Lite who is female. His appearance is quite cool with his tight clothes and digital effects when issuing skills. Use Blink heroes for attack strategies.

Here are three of Claretta’s skills that are dominated by teleportation:

Related :How to Top Up Cheap Hyper Front Lite, Can Use Credit and e-Wallet!

Have you ever watched One Punch Man? There’s a name for it, Genos, now Blood Raider is very similar to Genos. The whole body and face are made of steel, making it look like a robot.

Blood Raider is a paid hero in Hyper Front Lite, but you can buy it with yellow coins. Here are the various skills that Krove aka Blood Raider has.

The last Hero in Hyper Front Lite is Valkyrie with the real name Targh. This is a Guardian class hero whose style is Shield/Suppressing Fire. You could say Valkyrie is the best hero because her skills are very complete.

Related :29 Questions Carefully August 17 along with the answers, complete

Here are some of the Valkyrie’s skills:

If you are confused about which one to choose, you can see the recommendations for the best heroes in Hyper Front Lite for each class below:

If you want to buy a hero but are confused which one is the best, you can try all Hyper Front Lite heroes in Training mode. After it feels right, you just top up Star Quartz and buy the hero of choice in the Heroes menu.

That’s the review that admin can share about the name of the hero in the most GG Hyper Front Lite complete with skills or abilities. Hopefully this can be a reference for those of you who are confused about choosing the best hero.