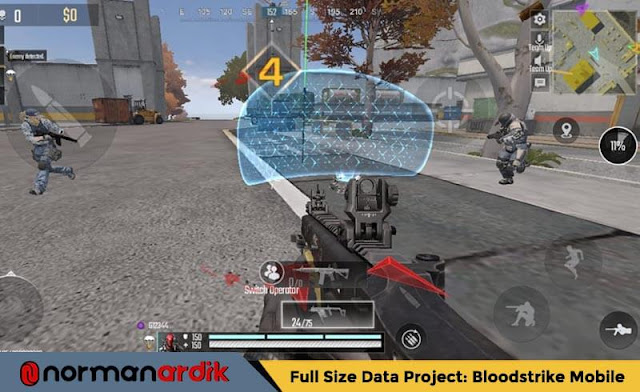 A few days ago the admin tried to download and play the game. It turned out to be quite fun and the most interesting, the gameplay is similar to COD Warzone Mobile! After trying, you will feel there is no difference between the two.

But there is one significant difference, namely that the full size Project: Bloodstrike is much smaller. It can even be played on cellphones with low specifications. Curious about the full data? Check out the following explanation.

What is Project: Bloodstrike?

Project: Bloodstrike is a game made by NetEase with the FPS battle royale genre. Different from similar games, here players can improve their skills and playing style using mods in the game.

But for now, Project: Bloodstrike is still in Early Access or technical testing. Later, after receiving user suggestions, NetEase will release the final version which is certainly better than the current version.

One of the most interesting things about Project: Bloodstrike is the Unlimited Respawn feature. Where every player can re-enter the game after being killed, but on the condition that there are still teammates left.

For characters, there are 8 options to choose from during matchmaking. Each has a different look, and unique skills to support the game.

In the gameplay section, each player is given a gun when he gets off the helicopter. Better weapons can be found in the Crate. Players can also purchase items using Coins obtained from the battle arena.

Overall, Project: Bloodstrike is similar to Call of Duty Warzone Mobile which will be released in the near future. The admin doesn’t see much difference between these two games, except in the data size or full size.

Well, if you are interested in trying it, make sure you first know the full size Project: Bloodstrike and the minimum Android specifications below.

On Google Play the download size of Project Bloodstrike is 792MB. Standard size for battle royale games that rely on high graphics. So before downloading, make sure you have a lot of internet quota or use Wi-Fi.

After the game is played, the full size of Project: Bloodstrike will certainly increase. But about, not up to 5 or 10GB really, even under 2GB!

For games that are still in the development stage, the full size of 1.08GB is not final. Because there are still many imperfect graphics and the Lobby display is still like a potato cellphone game.

Most likely after the final version is released, the data size of Project: Bloodstrike can reach 4 to 5GB. But this depends on Call of Duty, if they sue for copyright, Bloodstrike will disappear in the Playstore.

After knowing the full size of the data, which can be said to be very light, now the admin will explain the minimum specifications of Project: Bloodstrike. Unfortunately this game is only available on Android, for iOS maybe in the near future.

Admin tries to play Project: Bloodstrike on Redmi 9C, it’s pretty smooth, but still lacking in terms of graphics. From NetEase itself, here are the minimum system requirements.

Because the data size is less than 1GB, you need at least 3GB of free memory. Later this can be a space if there are upgrades or additional features.

In terms of RAM, actually 2GB is eligible. But it’s better to play on a cellphone with 3GB RAM specifications to avoid lag or breakage.

Considered a plagiarism Call of Duty Warzone Mobile, this new battle royale game from NetEase is indeed quite interesting to try. Moreover, the data required is not much. The point is that it is very friendly for potato phones.

So that’s the explanation that can be given regarding the full size Project: Bloodstrike along with the minimum specifications. If you are interested in trying it, just download it for free on Google Play!