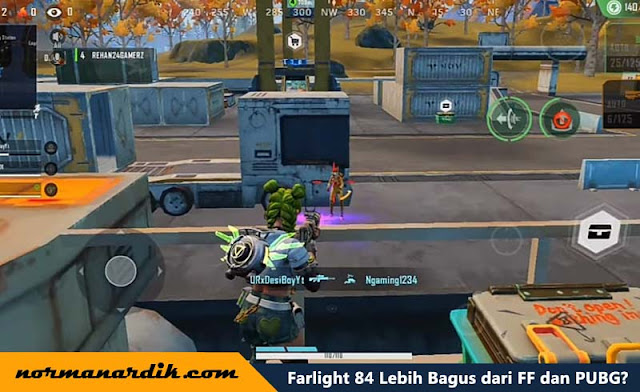 Battle royale-themed games on mobile devices are currently popular. After the dominance of PUBGM and Free Fire, finally a new game that is quite hype among gamers has emerged, its name is Farlight 84.

The game, which was previously quite popular on PC, is starting to target mobile users with its stunning appearance and gameplay. We will be spoiled with interesting arenas and weapons that are different from other battle royale games.

But, is the game Farlight 84 able to captivate the hearts of gamers, especially in Indonesia? Considering previously that Call of Duty was unable to compete with PUBG Mobile or Free Fire.

Farlight 84 at a Glance

Farlight 84 is a super fierce battle royale game that can be played on Android and iOS. The synopsis of this game is taken from the future, in the year 2084, where the Wasteland world is on the verge of collapse.

Players will jump from planes and battle each other for victory. Yes, it’s not much different from other battle royale games.

However, Farlight 84 can be an alternative for those of you who want to find a new atmosphere if you are bored with FF or PUBG Mobile.

From the gameplay, Farlight can be said to be a combination of Free Fire, Apex, Fortnite, and there is a little bit of Valorant touch on weapons and character movements.

The most interesting thing, in Farlight 84 there is a Jetpack that allows us to fly to spy on the enemy or away from the red zone.

Almost all battle royale themed games have a large size. PUBG Mobile is more than 2 GB when played, and Free Fire is 500 MB for file size only.

So, what is the full size game Farlight 84? Once played, this game takes up about 1.2 GB of storage space. Up almost 50% of the file size on Google Play which is only 866 MB.

So you could say, Farlight 84 requires a smartphone with high specifications for better gameplay and graphics.

While the minimum Android phone that can play this game is Android 6.0, 2GB RAM, and 1.4 GB of free memory. But, it would be better if you have an Android with 6 GB RAM specifications.

Is Farlight 84 Online or Offline?

All battle royale games require internet in order to connect to other players. Therefore, Farlight 84 is an online game that can only be played if you have an internet connection.

Farlight 84 itself will be released on mobile devices on June 21, 2022. You can download it on Google Play or the App Store.

So, it is clear whether the Farlight 84 game is online or offline, the answer is online. Because in the battle royale game, there are many players who join the game, just like FF and PUBG.

Although the components in the game are different from the battle royale game, the overall gameplay of Farlight 84 is almost the same. We will jump from the plane, look for weapons, and fight with other players.

This is a review of the Farlight 84 game which is a new battle royale game that is a competitor to Free Fire and PUBG Mobile. Can this game beat the dominance of the two? Must be waiting for a breakthrough from the developer!