Homepage » TikTok » How to Distinguish Original and Fake Xiaomi Chargers, Understand Before Buying! 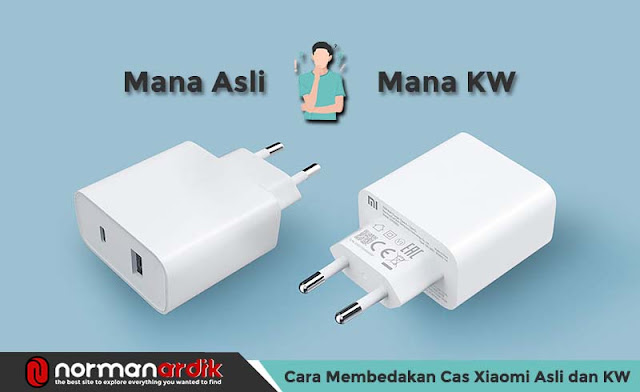 How to Distinguish Original and Fake Xiaomi Chargers – Xiaomi is arguably the most popular cellphone brand in Indonesia. Xiaomi cellphone users are evenly distributed from all walks of life. Apart from being cheaper, the quality is also pretty good.

But unfortunately, this popularity is used by people to produce counterfeit goods or KW, especially chargers and earphones. Under the pretext of 100% original charging at low prices, in the end, many people were deceived.

Well, to prevent this from happening, there are some special ways to tell which Xiaomi charger is genuine or fake. Because if from the outside, both look the same and quite difficult to distinguish.

How to Distinguish Original and Fake Xiaomi Chargers

Charging on a smartphone is a crucial thing that must really be considered. Because as we know, currently all cellphones already use embedded or non-removeable batteries.

The use of fake chargers is not recommended because it can reduce the quality of the battery. In addition, the battery life can also be shortened or drastically reduced.

Here are some ways to distinguish genuine and fake Xiaomi chargers that must be understood:

Price can be the main parameter to distinguish the original Xiaomi charger and kw. Usually, the original charger is priced at Rp. 150 thousand including Data Cable and Adapter. While the fake ones are under Rp. 100 thousand, even Rp. 30 thousand.

But, to avoid cheating the seller, you should buy a charger at an official store. You can check on Tokopedia or Shopee, the name of the store is Xiaomi Official Store.

Here’s the price list for Xiaomi chargers at the official store:

Next, how to distinguish the original and fake Xiaomi chargers can be seen on the physical appearance. Original USB charging cables are usually longer, thicker, and less rigid.

While the kw tends to be thin, when held feels slippery. In addition, if you pay attention to the ends (plugs into the cellphone), the kw charger is made carelessly and not neatly.

3. Pay attention to the charger head

Every charger produced by Xiaomi has a serial number. You can check on the side of the Adapter. There is a serial number 2F62xxxxxx and a barcode which, when scanned, will enter the official Xiaomi website.

While the fake Xiaomi charger only says Input, Output, and Model. Although there is also a barcode attached, but it is just a display to further convince buyers.

How to distinguish the original Xiaomi charger and the next fake may be technical. You can use the “Ampere” application on Google Play. The way it works is knowing the Input and Output values ​​when the cellphone is being charged.

First download Ampere by Braintrapp. If so, take a look at the side of the Adapter, note the Input and Output values. After that, charge the cellphone, open the Ampere application, then match it with the value or current noted earlier.

The same current value indicates the charger is genuine. On the other hand, if the Input Output is very different, then it is clear that it is a kw charger.

Actually, from the physical appearance, the original Xiaomi charger is very easy to distinguish. Especially on the USB head or the part that is plugged into the Adapter. If you pay attention, there are only 2 holes and the connection between the iron is very neat.

Still on the USB cable, the head is longer than the fake Xiaomi charger. You can see in the picture that the original case is made solid. Maybe because the components in it are neatly arranged.

As explained at the beginning, to distinguish the original and fake Xiaomi chargers, you just have to check the USB Cable section. The characteristics of the original Xiaomi case are more pronounced in texture and when compared side by side it looks thicker.

The original Xiaomi charger only has one sticker on the side which shows the serial number, Input, Output, etc. While the fake charger has a sticker near the plug, whether it’s a brand logo or the words “Original”.

It seems the four characteristics above are enough to add insight on how to distinguish the original Xiaomi charger and kw. If you want to be more certain, the authenticity of the charger sold at the official store is 100% guaranteed.

Charger is just a mobile phone charger. But the components inside are not designed for shared use. If your cellphone is Xiaomi, the charger is mandatory from Xiaomi too. Avoid using Vivo chargers, especially fake ones.

So, what are the effects of using a Xiaomi KW charger or a fake?

Fake or fake chargers have unstable voltage values. This will have an impact on battery health. For example, charging is slower and drops faster even though it’s only been used for a few minutes.

If you’ve ever experienced a battery from 30% then suddenly to 90% or vice versa, you can be sure that’s the effect of using a fake charger.

Well, by reading the reviews above, now you can be more careful when you want to buy a charger. Yes, this also applies to Samsung, Realme, Vivo, Oppo, and Infinix chargers.

Some users think that the charger can be used for all smartphones. When in fact, cellphone power can only be charged with the default charger or original charger purchased at official stores and Service Centers.