Homepage » TikTok » Why Can't Sell Players on FIFA Mobile 22? Here's How To Overcome It 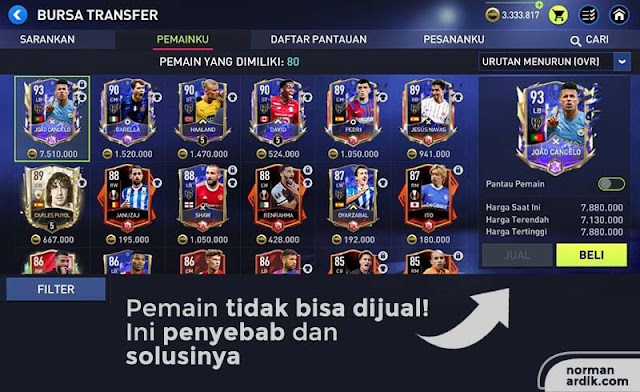 FIFA Mobile or Fifmob is one of the most popular sports genre games besides PES E-Football. Apart from being licensed directly from FIFA, the gameplay is also very interesting and there are lots of cool events.

However, in the 22 or 2022 edition of FIFA Mobile, EA Sports has made many changes, both from the gameplay and the basic game system. One of them is the system of buying and selling players.

If in previous editions we were free to sell trained players, now we need Training Transfer Items to do so.

That’s an obstacle for novice Fifmob players. They are confused when they want to sell players but fail. But calm down, this time I will give a solution on how to overcome being unable to sell players in FIFA Mobile 22.

Causes Players Can’t Be For Sale

Before discussing the solution, we will review some of the reasons why players cannot be sold. This is very important for novice players who are just playing FIFA Mobile this year.

It seems as explained at the beginning, players who have been trained cannot be sold just like that. We have to transfer the training level to another player using the Training Transfer Item.

The Training Transfer Item itself can be obtained in the Star Pass mission. But it is quite difficult to get it because each Star Pass level requires 200 points.

Therefore, if the players you have are still below the OVR of 89 or 90, you should not train so that later they can be sold if they do not match their playing style.

2. Players are still in the Starting Eleven

Players who are still in the Starting Eleven are marked with a jersey icon on their card. If you have several Line Ups, you should check one by one whether the player is in SE or as a substitute.

Every time you start playing, FIFA Mobile gives away some free players. Usually players who play in the Premier League, such as Foden, Trent Alexander Arnold, to Timo Werner.

Such free players cannot be sold. If you want to get rid of it, the best solution is to do Exchange or Exchange in the Icon event.

How to Overcome Can’t Sell Players on FIFA Mobile 22

So, you already know why players on FIFA Mobile can’t be sold? Some of these factors must be understood by novice players, because they will be very useful in navigating this season.

1. Transfer Practice to Another Player

Transferring training levels to players can be a solution if you want to sell players who have been trained. Although it takes a lot of Training Transfer Items, but it will be very worth it if the price of the players is quite expensive.

Of course you have to level up the Star Pass first. Complete every mission, such as Division Rivals, League Tours, Daily Practices, to TOTY to earn Star Pass points.

The next way to deal with players who cannot be sold is to remove them from the line-up. “Eh bro, the players have been replaced but how come they still can’t?”, maybe the player is still in another Starting Eleven.

A few tips for those of you who want to sell players, don’t choose the “Quick Sell” option, because later you will only get 100 coins. Choose the “Sell” option, even though it is quite long and subject to 10% tax, but the coins can be used to buy other players.